The sources:the Ministry of Foreign Affairs’ official website (As of Mar. 2016)

After many years of war and economic sanctions, many school facilities in Iraq were abandoned and unable to be repaired due to budget shortage. Meanwhile, air raids and looting after the Iraq war in 2003 made the condition of the schools even worse. We found that elementary schools, especially those in the poorer districts, were far from being safe or hygienic. From August 2003 until December 2013, JEN carried out programs to restore facilities in elementary and secondary schools in Baghdad’s poorer districts and also started hygiene education programs for these schools.

Focusing on repairing and restoring water facilities, we have renovated school facilities in collaboration with the Ministry of Education in Iraq and UNICEF, so that children could learn in a safe and hygienic environment.

As part of our hygiene education programs, we held workshops with teachers to teach them how to use repaired water and sanitation facilities in the schools, and how to keep their students at good health by using these facilities. We also supported activities to maintain school facilities by providing cleaning equipment to encourage students to clean up after themselves. We also provided children with sanitary kits, which each contained a toothbrush, a towel and soap, so that they could enjoy the process of becoming more accustomed to hygienic practices.

In 2009, we extended our project sites to the Anbar, Babil, Kirkuk and Dyara provinces. Thanks to the improved security conditions we were able to expand our activities to more regions. As a result, we could contribute to the support and educational services of a diverse range of people, and provide equal access to these services regardless of religion or ethnicity.

Repairing the sewage system in Baghdad 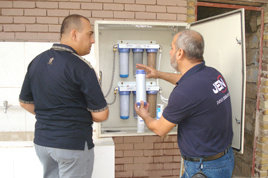 The condition of the sewage system in Baghdad was another serious problem. An insufficient amount of water hygiene facilities and a lack of operation and maintenance due to financial deterioration (resulting from economic sanctions) caused a large amount of sewage water to gather in spaces where children play. The situation risked becoming a health hazard to the residents. Furthermore, during wintertime when it rained a lot, sewage water pooled all over the roads and it made not only people but also cars unable to pass in some regions.

Under these circumstances, JEN repaired water pump facilities in the sewage system, which prevented dirty water from flowing back to the towns, and thereby improved the sanitary conditions of the residents.

JEN’s Emergency Assistance since the start of the Iraq war 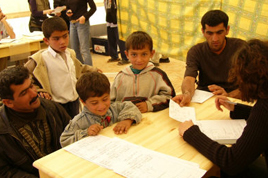 In March 2003, attacks by the American and English troops signaled the start of the Iraq War, which led to the deterioration of the local society. Social and economic infrastructures in Iraq were destroyed and plundered, and people’s standard of living deteriorated dramatically. As a result, Iraqi refugees rushed to the Jordanian border in urgent need for housing, food, and medical services. From June to August 2003, JEN organized medical support programs in two refugee camps on the Jordanian border buffer zone near Runqayshid, in collaboration with BHN Telecom Support Council. We set up medical clinics in each of the camps and provided medical care and hygiene education to a total of 4,340 people. 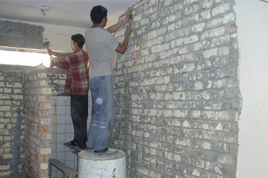 After the war, there were frequent bomb attacks in many places, which threatened the lives of ordinary civilians. The need for water, electricity, education and healthcare became particularly crucial under these dire circumstances. In response to the situation, JEN set up an office in Baghdad and started a new program to restore school facilities that had been overlooked due to budget constraints during the Hussein era and then heavily bombed and looted during the war. Local companies contracted through bidding carried out the restoration work. They replaced walls and floors, fixed windows and doors, repaired electric cables and rebuilt toilets and washrooms. JEN also repaired water pump facilities in the sewage system, which prevented dirty water from flowing back to the towns, and thereby improved the sanitary conditions of the residents. In 2004, due to security reasons, we shifted to an office in Amman, Jordan, which is mainly run by local staff.