JEN started assistance to Iraq in 2003 by providing emergency medical aid in refugee camps on the Iraqi-Jordanian border. Today we are working on restoring sanitation and school facilities, as well as carrying out hygiene/sanitation workshops to support socially vulnerable children. Our workshop focuses on a hygiene education program, which covers daily hygiene practices and prevention of diseases. By using educational materials such as coloring books and by practicing brushing their teeth, children familiarize with the idea of hygiene and sanitation while having fun. Currently, JEN is expanding its project sites. We not only operate in Baghdad, but also in other poverty-stricken areas such as Babil, Kirkuk, and Dyara provinces. As we expand our activities, we aim to reduce the regional unbalance in aid and educational support and to provide equal access to aid regardless of ethnicity or religion.

Also, since October 2014, JEN has provided emergency support to IDPs (internally displaced persons) who fled from the government and armed forces to northern Iraq's Kurdish region.

Until They Can Return Home—Emergency Assistance to IDPs-

Since June 2014, the situation in Iraq has worsened again due to the activities of the armed forces. Furthermore, since October 16, 2016,the armed forces formed by the government forces started a military strategy to retake Mosul. As of February 2017, approximately three million people have escaped from their hometowns* and are living as evacuees.

Given the situation, JEN has established a branch office in Iraqi Kurdistan, where many IDPs are finding shelter, and has started providing emergency assistance to them since October 2014. JEN is providing IDPs living in the local host communities and refugee camps with safe water and a hygienic environment in order to ensure that all the families will be healthy when the time comes to return home. JEN is also working on capacity building such as skill on acquisition of water and sanitary facilities repair. Hopefully, they will be able to make use of the knowledge and experience they have gained through this program when they return home. 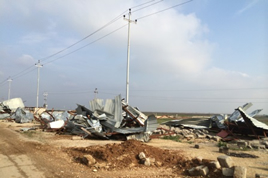 The armed conflict between the Peshmerga (the military forces of Kurdistan) and the Iraqi military, that has been ongoing since 2014,has not ended yet, but some disputed regions have been liberated.Although 1.5 million people have already returned to these liberated areas as of February 2017, it is not easy for the refugees to return to their previous ordinary life before the armed conflict. Public facilities and buildings were destroyed and people were left with no access to water and electricity and lost their means of livelihood. 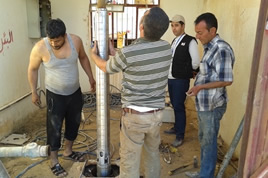 JEN is providing support so that the people returning to their hometowns can stay and immediately restart their daily lives there.JEN’s support includes repairing facilities and supplying water until destroyed water facilities are repaired.

*Source: IOM Iraq Mission Displacement Tracking Matrix DTM (The statics of the returnees) as of February 2017 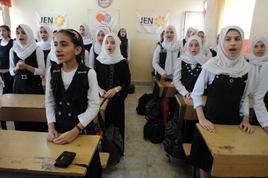 It is necessary for schools not only to provide children with a safe environment, but also to assure parents that their children are in good hands. However, many girls leave school early or fail to attend school because the school’s bathrooms are dirty or the school does not have enough bathrooms. 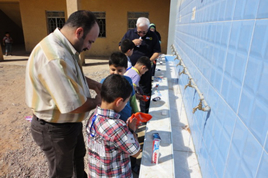 JEN is currently repairing school’s facilities—such as water and sanitary facilities—in Baghdad Governorate, Kirkuk Governorate,Saladin Governorate‎, and Babil Governorate. JEN aims to decrease the number of student absences, late arrivals, and early leaves resulting from unmaintained school facilities and to educate children about sanitation so that they can grow healthy. Additionally, JEN is monitoring the repaired facilities with the prefecture’s Department of Education. Through sanitary education to schoolteachers, JEN is also establishing a system in which the Department of Education,teachers, and schools could play the main role in continuing the maintenance of repaired facilities.