Many Syrian refugees have escaped to Jordan, one of neighboring countries of Syria. By the end of 2017, the number of fled Syrians refugees has reached to around 5.5 million, of which Jordan has sheltered 650,000, equivalent to 10% of its population. (*)
In 2013, JEN set up a branch office for its operations in Iraq in Amman, the Jordanian capital, and has kept an eye on what has been happening since 2011 when the influx of Syrian refugees began. In July 2012, after Za’atari refugee camp was built up near the Jordanian-Syrian border, we started to provide emergency assistance to those who fled from Syria in the camp and host communities, local communities which accept the refugees outside of the refugee camps.

At Za’atari refugee camp, where as many as 130,000 refugees lived at one point, JEN had been responsible for water sanitation environment as one of the leading organizations, and committed ourselves to maintaining the infrastructure for water supply and sewerage as well as the empowerment of communities. In the host communities, meanwhile, where about 80% of refugees are accommodated, the number of students at the local public schools increased dramatically as a result of the enrollment of Syrian refugee children, which in turn led to the shortage of class rooms and toilettes and the deterioration of learning environment due to the overused facilities. We responded to these issues by reinforcing the infrastructure such as the construction and restoration of water sanitation facilities at public schools as well as by providing hygiene promotion programs. We completed our duties at the end of June in 2018, passing over the tasks to other organizations.

* source; Jordan INGO Foram Syrian refugees in Jordan, as of the end of December, 2017.
https://reliefweb.int/sites/reliefweb.int/files/resources/JIF-ProtectionBrief-2017-Final.pdf

Extension and Restoration of School Facilities and Water Sanitation Equipment 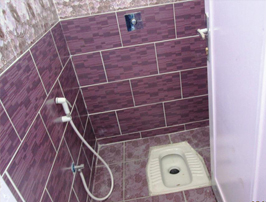 At the public schools in all 12 host communities in Jordan, JEN worked to extend class rooms, to maintain and repair water sanitation facilities such as toilettes and washing basins, and to restore other facilities overused by the increase of students. The unsanitary toilettes had discouraged especially girls to go to school or urged them to leave early. We improved the sanitary situation at school to ensure that children could go to school and concentrate on study without unnecessary worries. 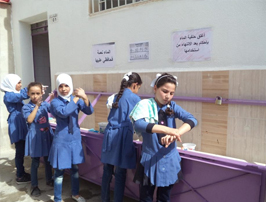 In response to the circumstances around water supply in Jordan, we also helped build the water recycling system to reuse the water after children wash hands. 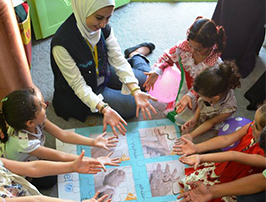 To habituate themselves to appropriate hygiene practices is as important as to maintain water sanitation facilities. As it is concerned for children to suffer from water-borne diseases due to the shortage and damage of water sanitation facilities at the public schools, we had launched the hygiene education program focusing on the hand-washing as a disease prevention, basic oral care, food hygiene, and the promotion of sanitary environment at school, as well as the improvement of lifestyle.

JEN started the program for school teachers, who in turn would instruct the students on sanitation and encourage them to help promote the hygiene at a whole school through the group activities. That is how we aimed to promote the hygiene enlightenment and habituation beyond school, expanding to the community. We also provided students with hygiene kits including a soap, a toothbrush and paste, and hand towel etc., so that they could wash their hands and brush their teeth both at school and home.

In addition, we provided the instruction on how to use appropriately and maintain cleanly sanitation facilities, as well as to preserve water resource. 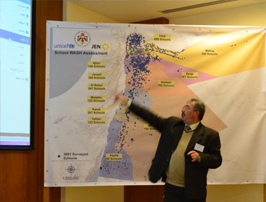 There are 3,681 public schools in Jordan, more than half of which need the assistance for water resource and sanitation. JEN had supported more than 400 schools between October 2012 and July 2018.

We exercised the nationwide survey on the demand for water sanitation assistance in collaboration with UNICEF, and created an information management tool, or Digital Dashboard, which the support organizations in water and hygiene sector can harness to analyze the water sanitation condition at school all around the nation.

On July 29th, 2012, a refugee camp was built in Za’atari, Mafraq in the northern part of Jordan. Composed with 12 districts, it is as large as 5.3km2 (equivalent to 112 times of Tokyo Dome), where Syrian people fled out of warfare. About 20,000 refugees had settled at the camp at the beginning, whose number increased to 130,000 instantly.

However, here is a dry wilderness with nothing sheltering them from the scorching sunshine in summertime, while temperature falls down below zero due to the rain and snow during the winter. Dusty winds blow throughout a year over the land, causing a damage on the daily life and health of refugees. That is how people are forced to live in such harsh condition. In addition to that, Jordan is one of the countries with scarce water resource. So when they hosted refugees, the most urgent issue was how to secure the sustainable water resource.

JEN had started the emergency support since the launch of the refugee camp, mainly on water sanitation area, while other global support organizations worked on various projects as well. After 7 years since the camp was set up, it was decided to integrate those projects of various organizations at the camp efficiently. So JEN finished our duties at the camp in March 2018, handing over the tasks to other organizations. 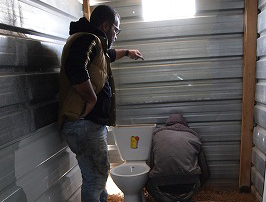 With scarce water resource, it is hard in Jordan to supply water evenly to all the residents at the refugee camp as the water supply per capita decreases since the surge of refugees.
The unbalanced water supply may bring the distrust among people and lead to the huge dissatisfaction. That’s why JEN, as one of the leading organizations on water sanitation area, took the initiative on the maintenance of water related facilities at the camp, including the monitoring of water supply. 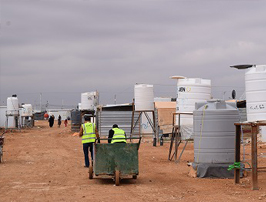 In October in 2013, we set a goal to ensure that everyone got access to safe and clean water equally and to prevent the degeneration of sanitation environment by polluted water, working on building up the massive infrastructure for water supply and sewage within the camp. When commonly-used makeshift toilettes were replaced by individual house toilettes, we helped installed toilettes to 1,776 households who were unable to build it up on their own. 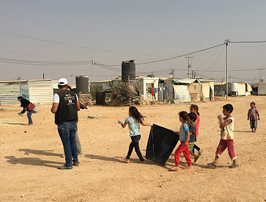 It’s essential in terms of the prevention of infectious diseases for residents to have a proper knowledge on sanitation and exercise sanitary practices voluntarily. JEN held sanitary sessions on the subjects such as the significance of washing hands, how to prevent the spread of lice at school, and the oral care and hygiene, with a help of community sanitary promotors of the residents at the camp. We also organized regular workshops and events for children under 17 years old, which accounts for more than half of the residents, so that they can learn the hygiene with funs.

Due to the social and economic circumstances, the access to the basic education is limited at the camp for the youth under 17, more than half of the total residents. Even getting the income at the camp is limited in numbers and occupations. That’s why JEN launched the training and internship program of Journalism for the young residents, and more than 300 youths had participated it in all process. We do hope that one day they would make their dreams come true to rebuild their country back through the journalism when they come back home in Syria. 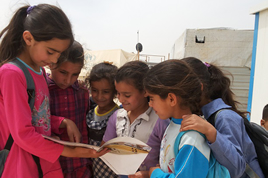 The transportation is limited within Za’atari refugee camp. It is difficult to create an opportunity for all residents in 12 districts to share their views and to get information on the services and events provided by each organization at simultaneously. That information disparity was the biggest problem at the camp. JEN launched a monthly Arabic magazine titled “A Tarik,” or “The Road,” which enables the residents not only to get necessary information whenever they need but also to send their messages out on their own.

THE ROAD in collaboration with Courier Japon Those young residents between 15 to 25 years old, both male and female, who wish to become journalists and photographers in future, joined the production of this short film. 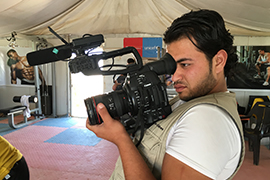 They captured various scenes of their daily lives in the footage, which were posted and shared on the Internet.

As more than 5 years have passed since the launch of the camp, the wide spread of disparity in the lifestyle among the residents has become a huge problem. The family component varies in each household, from a single parent family to a family with many children, from aged family to a family with impaired members. Some of them couldn’t get access to the support even if they are desperately in need. So JEN set forth the establishment of the communal support framework to assist mutually the most vulnerable. “My Family Plus One” is the project for one refugee to support other, for example, a group of technically trained women (139 members in total) and men (3 in total) mending worn out mattress covers for other refugees, or repairing the deteriorated residents. 280 households have been granted the support in this way. 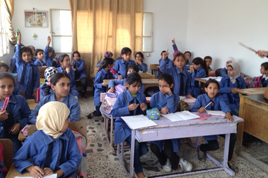 Following the conflicts in Syria, so many refugees fled and accommodated outside of the camp in Jordan, most of whom fled to their relatives or friends. As those Syrian refugee children enroll to the public school in Jordan, the number of students at school rapidly increases. The surge of students surpasses the capacity of schools, which can’t afford to respond to the situation properly. It is especially difficult for those schools either located in the poverty neighborhood or poorly funded to host increasing students. Then we exercised the survey over about 500 public elementary schools in the biggest host communities such as Amman, Mafraq, Irbid, Zarqa’a, and Ma’an. And to 150 schools which were particularly in need to respond as quickly as possible, we provided the restoration of school facilities and the sanitary reinforcement including the extension of toilettes and water tanks, as well as the hygiene promotion program to teachers and students. We expanded the activity area, surveying all public schools in Jordan and installing new class rooms. 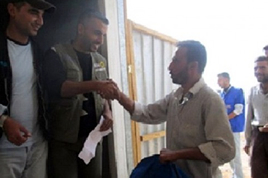 Between 2012 to 2014, we started to distribute clothing in the host communities and refugee camps located near the Jordanian-Syrian border. For the distribution, we made the packages of assorted cloths according to various family components, and provide them with a help of local residents. In January 2013, about 7,500 clothing were distributed to the female refugees fled to Za’atari camp and near the Northern Jordanian and Syrian border.

During the first half of 2013, we installed 21 laundry sections at Za’atari camp, located near the Northern Jordanian-Syrian border. While it was initially intended to provide the environment for women to wash their cloths safely as well as to improve the sanitary environment by separating drinking water from used water, it made an unexpected effect, serving as a communication opportunity for women to exchange their views.

Source: web site of the Minister of Foreign Affairs, as of January in 2017.