Infrastructure Support Project Focused on Pest Control, Inspection, and Management for Farmers in the Three Districts of KP Province Most Affected by Pest Damage (July 2020〜) 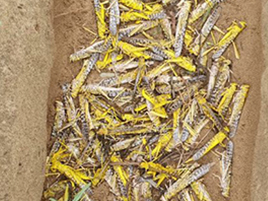 Image of locusts from our preliminary inspection of the area 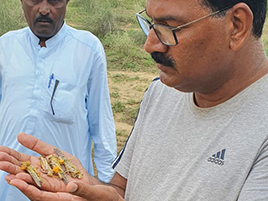 Image of locusts from our preliminary inspection of the area

In early 2020, various regions in Pakistan experienced serious pest damage. Especially in the D.I. Kahn District of KP Province and in the Tharparkar District of Sindh Province (as of September 2020, swarms of locusts infested the area and left significant damage), the extermination of pests was an urgent task. Furthermore, looking at the climate of the region, recurrent infestations are likely to occur. It was revealed that serious damage occurred even on pastures not included in the government’s extermination plan. For the most part, the livestock farmers that utilize these pastures practice grazing, and they rely on the grass found on the pasture as the main source of food for livestock. Therefore, due to the loss of the grass, the livestock experienced significant weight loss and became more susceptible to various diseases, which ultimately put the farmers in a vulnerable position.

KWe worked to control crop damage for farms in the D.I. Kahn District of KP Province and in the Tharparkar District of Sindh Province by providing the necessary materials and equipment and introducing an early-warning mechanism1 against pests. Concurrently, through providing emergency aid for livestock farmers who suffered from pest damage, we worked to deliver foundational support to rebuild their lives that were lost due to the damage. Due to the migratory behavior of the locusts, we shifted our target area from the three districts in KP Province (Lakki Marwat, Tank, D.I. Kahn) to the two regions mentioned above.

Creation of early-warning mechanisms for pests, and reinforcement of the structure of monitoring and managing pest control efforts
●We provide training on early-warning mechanisms, and conduct practice for monitoring pest levels on the farmlands.
●In order to ensure sustainability of the practice after the completion of the project, we (our district coordination officers) gather information and work on succession in Locust Control Room of the local agricultural bureau.
●Upon sharing IEC (Information, Education, Communication) documents that covered all components of the project with authorized personnel and members of the LCG, we carry out awareness programs throughout the project.

Emergency assistance for livestock farmers that suffered from pest damage
●We establish our targets to be the two union councils (UC: towns) located in D.I. Kahn District and four UCs located in Tharparkar District that experienced the most pest damage. Further, we target livestock farmers who, due to the pest damage, have experienced poverty and are in need of urgent assistance.
●Simultaneously, we recruit three livestock assistants through cooperative efforts with the local livestock bureau. These three assistants (one in D.I. Kahn District and two in Tharparkar District) perform vaccinations for small-sized (20,500) and large-sized (4,100) livestock owned by 4,100 households in the target area.
Additionally, the assistants provide antiparasitic treatments for livestock that had experienced a deterioration of health due to the pest damage.
●We distribute livestock feed to each household in the target area. We also host awareness sessions on health management of livestock for farmers that experienced significant levels of pest damage.

Supplementary information on the early-warning mechanisms
Photos and information are sent to an FAO-conducted smartphone app, and the FAO uses that information, along with data on weather and geography and satellite data to analyze and evaluate the current situation. The app will then provide forecasts and present tentative warnings if needed, at most 6 weeks before any pest infestation incidents.
http://www.fao.org/japan/portal-sites/desert-locust/desert-locust-qa/en/ 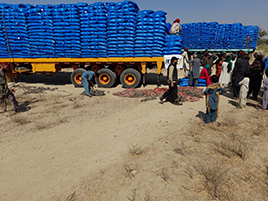 Image of livestock feed for distribution piled on truck 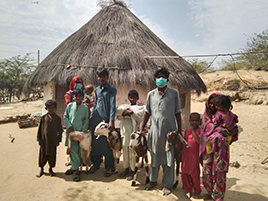 Photo of a farmer household that had suffered from pest damage, taken during distribution efforts of livestock feed

*This project was made possible through subsidies from the Japan Platform and donations made to JEN.

Currently, we are carrying out projects concerned with improving the water and sanitation conditions in the Kurram District. In order to further examine ways in which we can support this District and its reconstruction efforts, we conducted various surveys and investigations with the cooperation of local community members.
The overall literacy rate in the Kurram District is at a crucially low value of 33%, and the literacy rate for women is at an even lower value of 13% 1
The low literacy rates in the Kurram District, compared to other regions in Pakistan, can be linked to destroyed buildings due to civil wars and acts of terrorism, which has made it difficult to establish conditions in which girls can study in a safe and effective manner. There are also many girls who are unable to attend school due to religious reasons. Various research have revealed a positive correlation between the female literacy rates and the quality of lives of the people in the region.2

The Sarpakh All-Girls Junior High School is the only all-girls junior high school found in the 15 villages surrounding the Kurram District. Junior high schools in Pakistan are typically attended by children between the ages of 10 and 12.
This All-Girls Junior High School lacks various facilities that would make it safe for girls to attend school. Through multiple meetings and discussions with the faculty members of the school, we identified 4 components that need to be addressed immediately. The aid work for this rebuilding scheme is crucial, as the costs associated with these reconstruction efforts are significant, and parents of the students and also the government have no monetary means to support this project. In this project, we aimed to mainly establish and reinforce various facilities of the school, and through this, we hoped to see an improvement of learning conditions, and ultimately an increase in the literacy rates of girls. 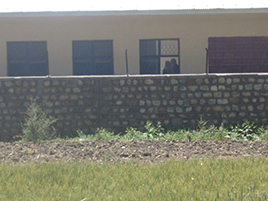 Image showing the visibility of classrooms from the outside

Through improvement of existing resources (expansion of the exterior wall surrounding the school, reparation of the drainage system), and supply of playground equipment and books, we were able to successfully implement a safer environment in which the 149 students of this school could study in. This project could not have been possible without the generous donations from our supporters through crowdfunding. We would like to express our sincere gratitude for the continued support. 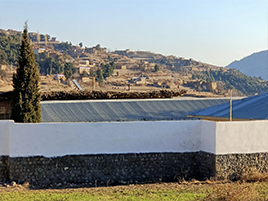 Image of the completed exterior wall 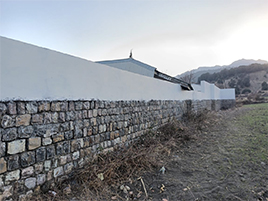 We began preparation efforts and collected materials needed for the project in October of 2020, and construction began in November.

The construction process was as follows: Image of the new library with books Image of the schoolyard with newly installed playground equipment

We worked to finish the construction of the exterior wall before the harsh winter hit. Additionally, we saw students, teachers, and members of the local community attend and participate in the handover ceremony hosted on February 1st.
During the monitoring phase, many students talked about how their classmates and friends may now be able to come back to school, thanks to the construction of the exterior wall. Other students expressed their excitement about being able to go outside and play on the playground equipment during break periods, since they were not able to do that before. 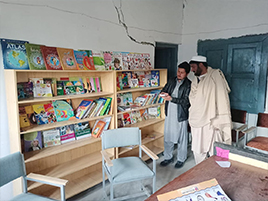 Image from the handover ceremony Image of community members in the finished library

References:
1.UNDP FATA Transition and Recovery Programme Result Report (2015-2016)
2.World Bank Group,2018 Missed Opportunities : The High Cost of Not Educating Girls
3. In Pakistan, the height of the exterior walls of schools is correlated to enrollment rate. For female students, the practice of purdah (customs associated with women staying out of the sight of men; wearing a veil is considered to be a component of purdah) can often clash with the height of exterior walls of schools. The fact that the interior of the school can be seen from the outside can create feelings of fear and uneasiness for students, parents, and teachers, and can be a major reason why some girls are unable to attend school.